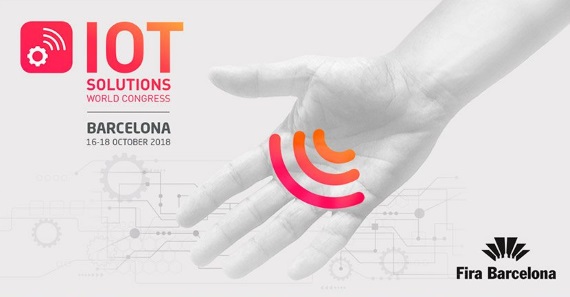 In October we visited the IoT Solutions World Congress in Barcelona (https://www.iotsworldcongress.com) as we are very much interested in IoT developments for both consumer and industrial applications. This quite a young event dates back to 2015, and we were positively impressed by its good organization and the number of exhibitors, speakers and visitors there.

As you approach the main hall of the exhibition area, you immediately see who the show makers are, what did not come as a surprise to us. Guess who we are talking about! They are big fishes that provide platforms for the IoT cloud developments. We were actually expecting to see these three: Amazon, Microsoft, and Google. For some reason, Amazon was not present at the congress, but Microsoft with its Azure and Google with its Google Cloud took the biggest booths with nonstop presentations about various IoT topics as well as demonstrations presented by their partners. Discussions about the general IoT project challenges like “End-to-end security in IoT”, “Intelligent edge in your IoT solutions” and also implementation examples by partners in different segments like “Smart buildings”, “Connected Car”, and “Intelligent supply chain” were among the topics of conversation. Both Microsoft and Google had a great job done, from our point of view, in bringing information to the visitors. The format added up to short to-the-point presentations followed by Q&A sessions.

But what’s the difference between the platforms? We had spent quite a time listening and talking to people at both companies and once again we concluded that the difference in many cases was minimal from the technical point of view, but the partnership networks and covered markets made a difference for sure. You can make integration of your devices and benefit from machine learning on both platforms with comparable latency in data pipelines and visualizations alike, but keep in mind the target market and countries when starting your IoT project. For example, right opposite Microsoft’s booth, we came across their big companion in IoT journey—the very well-known industrial company ABB (https://www.abb.com/). They also presented many interesting IoT-oriented developments and products with the focus on industrial automation projects solving such challenging problems like “continuous quality inspection” and “predictive maintenance”. So ABB had opted for Microsoft as their partner and planned further developments together based on the Microsoft Azure platform. There were also other Microsoft’s partners at the congress presenting industrial application solutions, like Toyota with their smart factory logistic, which made a strong impression that Microsoft sets a strategic focus on industrial projects in the direction of Industry 4.0. Of course it doesn’t mean that Google made no progress in that direction. They also had partners there, showing applications like, for example, windmills monitoring; but in general we could notice that Google, perhaps historically, had been more focusing on consumer market projects, at least in Europe. This might be also caused, for example, by different regulations on data protection and local representation, which are not the same in Europe and US.

It wouldn’t be fair to not mention other exhibitors as they also presented many interesting ideas and implementations. For example, Intel, Telit and Kaspersky had big booths with various installations. Intel presented showcases with industrial robots in use based on artificial intelligence. Telit demonstrated their IoT modules and platforms for IoT project developers. Kaspersky was proposing interesting solutions to make your IoT devices secure and safe to handle.

We cannot cover all of them in this post, and we have no intention to do so. We just want to let our readers know about this event and share a very brief overview of it. The event recurs annually in October, and we would very much recommend visiting it to all who have an interest in this exciting technological sector.

Each of us can begin feeling it just today. With increasing connectivity speed for much lower prices, the realm of connected sensors and devices will definitely be growing tremendously in the nearest few years and it is so amazing to make full use of the possibilities, being a contemporary of this technological boost.

Quite an interesting prediction made by Cisco 7 years ago is now becoming a reality. 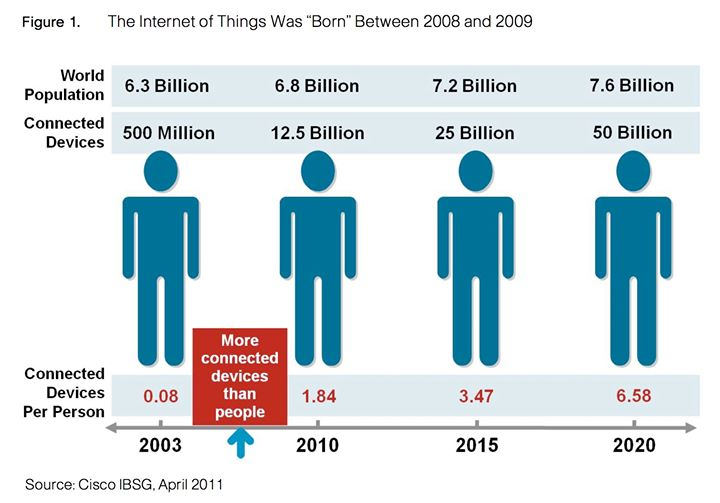